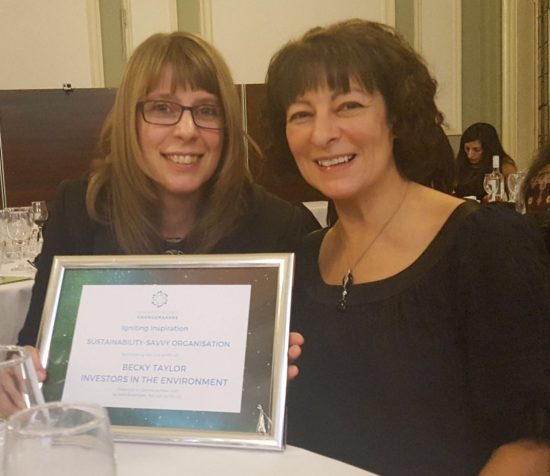 Investor in the Environment’s Becky Taylor is recognised for her contribution to sustainability at the inaugural Inspiring Women Changemakers ‘Igniting Inspiration’ Awards.

At the Inspiring Women Changemakers ‘Igniting Inspiration’ Awards in Bradford last week, Becky Taylor, who runs ‘Investors in the Environment’ in Yorkshire & the Humber, was presented with an Award for the Sustainability Savvy Organisation. The judges noted Becky’s passion for sustainability and her ability to make a meaningful impact through her work. She was nominated for the award by iiE member Michelle Marks (pictured above) of Coral Mountain.

In September 2016, after over 20 years’ experience in industry, Becky gave up a  full-time career to take over and develop the Yorkshire & Humber region of Investors in the Environment, alongside John Mooney from Pennine-Pack, the Packaging compliance organisation based in Hebden Bridge. Both organisations are part of the Green Business Network.

Inspiring Women Changemakers is a dynamic movement of women leading transformational change – in work, in society, and in the world. www.inspiringwomenchangemakers.co.uk

Who’s behind Igniting Inspiration?
Igniting Inspiration is the brainchild of Anj Handa, Founder of Inspiring Women Changemakers. She’s a businesswoman, speaker and writer who is passionate about making positive social change.
She says “Women who are working hard to make a positive difference to their workplaces or communities often don’t get the recognition they deserve. They work tirelessly and rarely stop to reflect on the impact that they’ve made on the people around them.
They’re usually reluctant to put themselves forward for accolades, because they don’t feel they’re doing anything special. Through my wide-reaching networks, I discovered so many positive stories that were going unheard, particularly within minority communities.
And while there are numerous campaigns for women in business, there is no one campaign – online or offline – that regularly promotes the dedication of women changemakers. This is why I created the Igniting Inspiration Awards.”